Skydive Empuriabrava is an internationally recognised skydiving destination, is The Land of the Sky, where you can live a skydiving experience in its purest form for all levels. Professional skydivers, lovers of heights, beginners, etc. Today, Skydive Empuriabrava has all the necessary resources for everyone to enjoy skydiving to the full.

Over 30 years ago, however, it was a slightly crazy idea. But the creators of this project boldly took a giant leap to make their dream come true. They launched the project with the same enthusiasm and excitement with which they jumped from planes and gave shape to what we are today.

A benchmark centre both in Europe and worldwide, with an exceptional location, great facilities and the best fleet of aircraft.

The first skydiving centre in the world to reach the 2,000,000 jump mark. A great organiser of world-class events and championships. Training camp for the best skydiving teams in all disciplines, including some current world champions.

Throughout its history, Skydive Empuriabrava has been a prolific organiser of world-class meetings, has hosted endless other smaller competitions and has collaborated at different events.

From the 29th of July of 2015, Skydive Empuriabrava has modified the trade policy in order to increase its social approach. Since this date, for every Tandem skydive made (GOLD or PLATINIUM), the company donates 3 Euros to charity. These two types of Tandem skydive represents, approximately, the 70 % of the total sales of Tandem skydives. 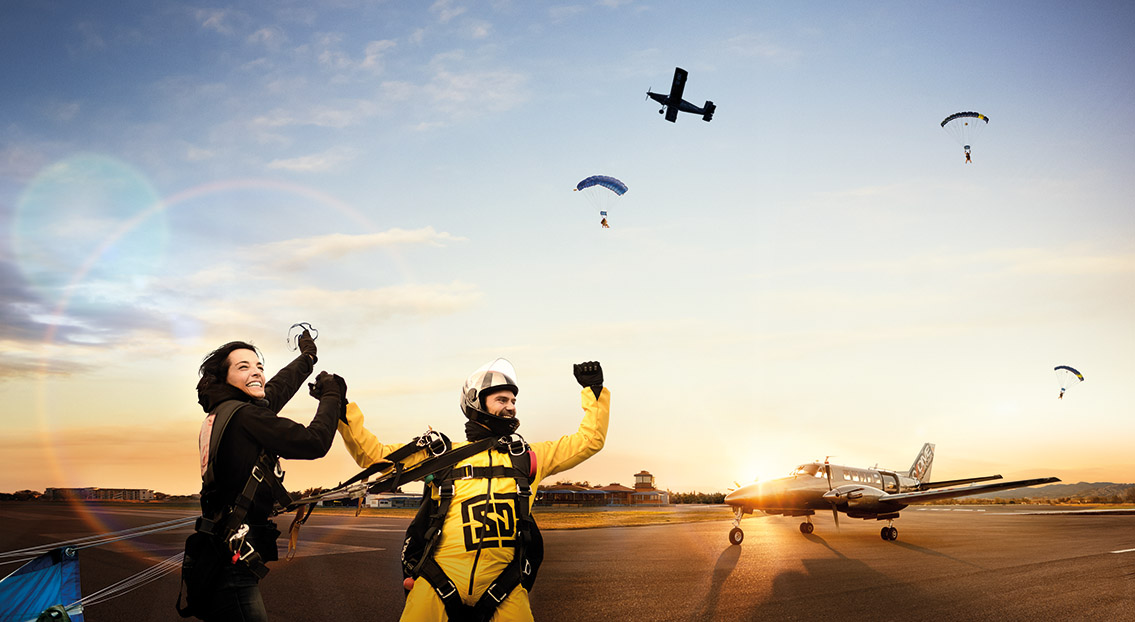 Skydive Empuriabrava has also been presented with the “Espiga i Timó” Award of the Council of Castelló d’Empúries, the 22nd Tourism Night Award from the Girona School of Tourism, and the Association of Tourist Apartments “Sun of the Costa Brava” Award. It likewise played a key role in the award to Castelló d’Empúries of Sports Tourism Destination (DTE) status by the Government of Catalonia.

In 2010, the Catalan Government recognised its outstanding contribution to tourism in Catalonia by awarding it the Tourism Diploma of Catalonia. It has also been presented with the “Sirena” Award of the “Empordà” Awards 2015.

The sky is yours

Everyone who skydives has been there too, just like you. Fearful but excited. Hesitant but eager.
Scared but daring. And we said yes.
I want to experience freefall. I want to skydive.
The feeling of skydiving for the first time cannot be expressed in words.
All we can say is “Don’t think too much... just do it!”
If you are like us, then you’ll want to do it again! 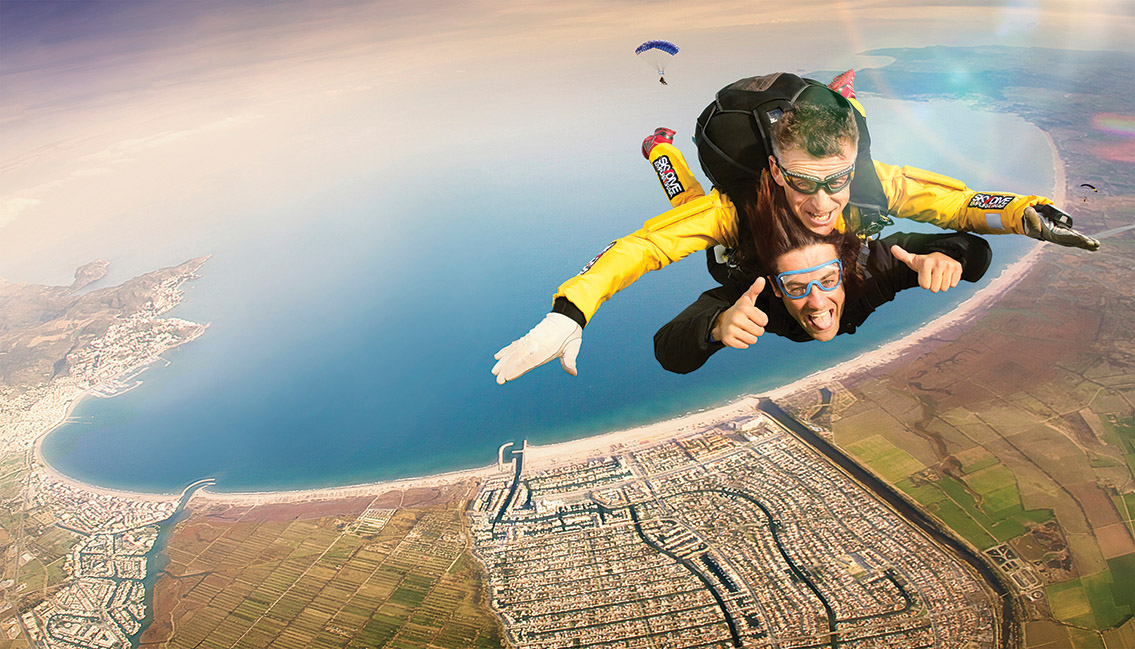 On your first parachute jump, you will be accompanied by a professional instructor who has jumped thousands of times.
He will tell you what a tandem jump consists of and give you a few simple instructions.

You will ascend to an altitude of 4,000 metres in a light aircraft and then, together, you jump.

There will be one minute of freefall until you reach 1,500 metres.

At 1,500 metres your instructor will open the parachute.

You will then experience a 5-minute flight with your tandem parachute over the wonderful landscape of Empuriabrava (Girona), and enjoy the striking views of Cap de Creus and the Gulf of Roses. You will then land gently, at the point where your family and friends will be waiting for you.

Your feet will touch the ground and you will not be able to believe that you have now been skydiving. That’s something we have thought about. You will be exclusively accompanied on your first jump by a cameraman- skydiver, who will record this moment forever in a professional video and photographic report.

The Land of the Sky - Skydive Empuriabrava has got an extensive offer for MICE groups: 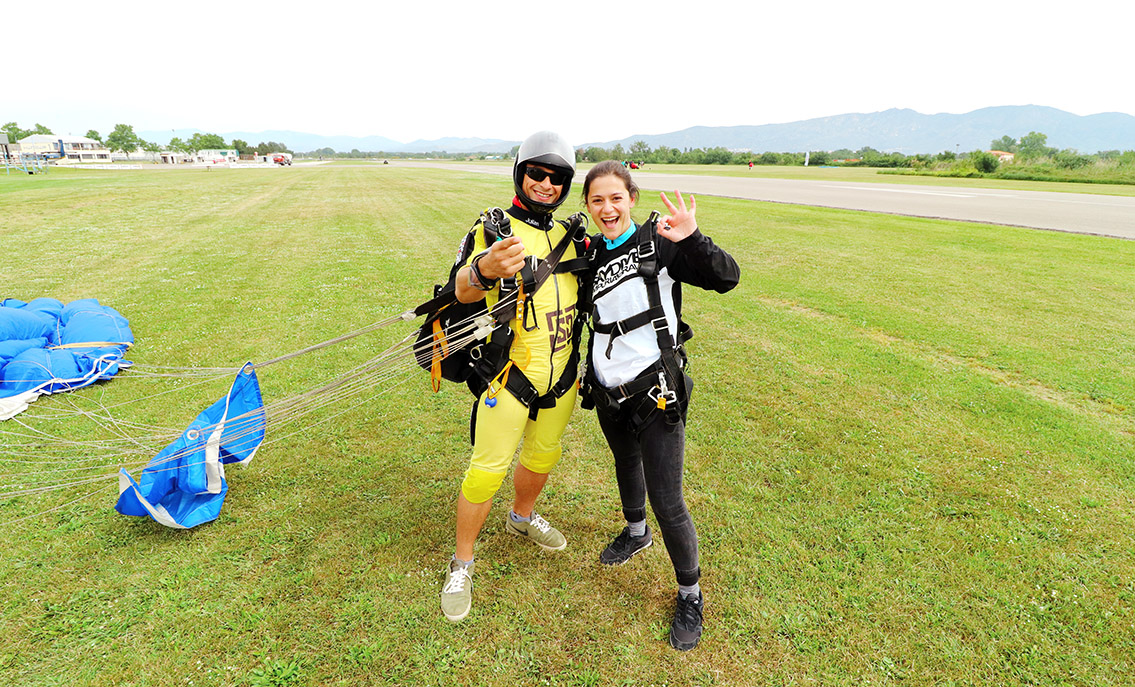