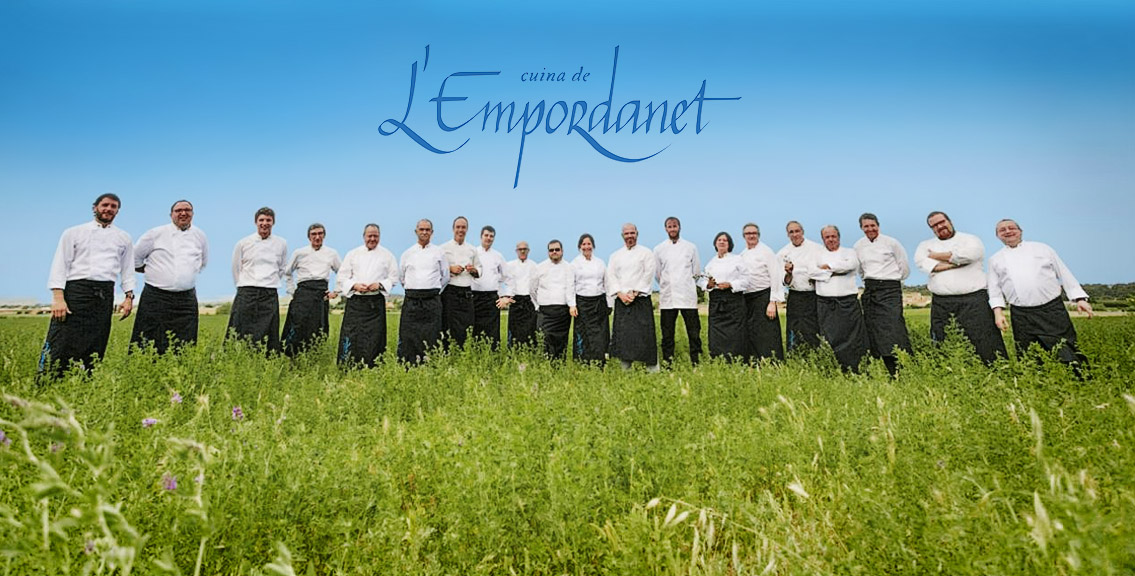 Cuina de l'Empordanet is a gastronomic group that was founded in 1995, which currently consists of 19 restaurants that offer excellent quality proposals, always prepared using local products and based on traditional Empordà cuisine.

Come and enjoy the Empordà

The Empordà petit or the Empordanet, names that Josep Pla used when referring to the Baix Empordà region, is, effectively a small region, but one that is greatly humanised with a great diversity of landscapes, caressed by the Garbí wind from the south-west and lashed by the Tramuntana from the north.

On the plain, a whole host of small hills add colour as well as being home to villages and towns.

The plain, which is still basically agricultural, combines fields sown with oats and barley and others full of alfalfa, sunflowers and rice fields, between the town of Pals and the banks of the River Ter.

There are also large plantations of fruit trees, particularly apples and peaches, olive fields with hundred-year-old trees as well as more recent ones, and old and new vineyards, small and medium allotments and a smattering of strategically placed farmhouses, which take care of this agricultural production.

Some of these farmhouses have herds of cows, and they all have chickens and an area for ducks and geese, rabbits and pigs and, in a few cases, magnificent flocks of sheep and goats.

All this surrounds the small villages of mediaeval origin, which still maintain all the charm of the past: Pals, Palau Sator, Peratallada, Monells, Ullastret, Llavià and so on.

Along the coastline, the villages have grown a great deal in recent decades as a result of tourism, for example L’Estartit, Calella de Palafrugell, Llafranc, Sant Antoni de Calonge and Platja d’Aro. Others which were already large, such as Palamós and Sant Feliu de Guíxols have also grown and have been transformed by the tourist activity, as well as those that are slightly inland, such as Palafrugell, Torroella de Montgrí and Calonge.

However, you can still find small maritime nuclei that are absolutely delightful: Sa Riera, Sa Tuna, Tamariu, S’Alguer and others.

This is the Empordà region!

The cuisine and the gastronomy of this country date back hundreds of years and are the result of a whole series of influences received from the many cultures that have travelled and settled in this corridor that connects the south, the centre and the north of Europe, as well as those who have come from all the shores of the Mediterranean.

Therefore, history has shaped a traditional cuisine with a great personality based on our two basic sauces: picada (finely ground ingredients including almonds used to thicken sauces) and sofregit (finely chopped ingredients such as garlic, onion, peppers and tomatoes sautéed in olive oil) and on our own local ingredients.

Fish caught on a trawl line, fish found among the rocks, seafood, fruit and vegetables, legumes, poultry, game and meat from the animals raised on the farms inland are the basis of our dishes, cooked using DO Empordà olive oil and paired with wines with the same denomination.

Therefore, the proposals from our restaurants are mainly based on the use of local products, from the sea and from the land, carefully prepared by our chefs, who are impulsive, imaginative people, as well as professionals.

The ability to mix meat and fish with sense and meaning gives rise to one of our most emblematic, unique dishes, the so-called "mar i muntanya" (sea and mountain) which, along with suquets (fish stews), rice dishes and meat dishes, are still the basis of our gastronomic offer.

All this has meant that today, ours is still one of the most highly appreciated cuisines in the world, which we encourage you to try out and, of course, to enjoy.

Gastronomy campaign with the restaurants of the Cuina de l’Empordanet, the Cuina del Vent and the wine cellars of the DO Empordà

The Sopars Maridats gastronomy campaign started in 2013, with the restaurants of the Cuina de l’Empordanet and the wine cellars of the DO Empordà. In 2015, due to the good results of the two previous years and the request from more wine cellars to join the project, the Alt Empordà gastronomic collective, the Cuina del Vent, also joined in.

Sopars Maridats is an invitation to enjoy Empordà cuisine in its fullest sense. A duo formed by a chef and a sommelier or wine cellar specialist who jointly put together the best combination of dishes and wines for the menu.

Since the beginning of the campaign, an evening meal has been put on by each collective with the corresponding wine cellar every Friday evening (apart from Good Friday).

Over the five or six months of campaign, some thirty evening meals are put on so that you can enjoy and taste the delights of the Empordà landscape at the table.